Way back before ‘Cool for Cats’ but some time after ‘Take Me I’m Yours’ I was in my flat with my good friend Barny, we were having fun and being silly. Somehow we ended up wrestling on the floor and tipping the room upside down, i think we may have been drunk. At one point […] 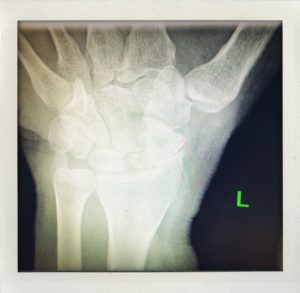 Way back before ‘Cool for Cats’ but some time after ‘Take Me I’m Yours’ I was in my flat with my good friend Barny, we were having fun and being silly. Somehow we ended up wrestling on the floor and tipping the room upside down, i think we may have been drunk. At one point he landed on my hand, it bent backwards and was suddenly i was in a huge amount of pain. Life moved on and i thought nothing of it. In 2009 the pain returned after a long tour, it was in my chord hand, the left one, and it started to bubble up. I blamed the wonderful structures of our complex but beautiful songs, but how could that be, and then i recalled the Barnaby fireside giggle and the tumble across the room. Alan Bates and Oliver Reed spring to mind, but i don’t think we were that drunk or naked.

Recently the fracture has become worse, although intermittent it keeps coming back, a surgeon told me that he could operate on it but i might not be able to play the guitar again, some might say that could be a blessing. He said he could set my hand to clamp chords or typing but not both. I left that thought with him back in 2009. This week i went to see the Doctor and she told me that i needed to rest and re visit the surgeon for another consultation as the pain had returned. I was heartbroken as this meant that i could not tour in America in March where i wanted to show off my talents as a story teller and songwriter. We are about to announce all the rescheduled dates which i think will be in the spring of 2020, this will give me time to heal and get my grip back on the fretboard.

With two major Squeeze tours and more solo shows on the vivid horizon i think this is the right thing to do. I hope you can make the new dates and hold out for the healing to take place. I was so excited and had my travel and hotels all planned out. Steve Smith has been amazing and understanding as have everyone around me. I feel heartbroken not to be coming on tour, the surgery won’t take long and i will soon be throwing shapes back out on the open stages of my life. For the time being i can play one off shows here and there, just to keep my hand in but not long runs of solo shows where self driving and playing are involved.

I have emailed Barny and told him how much i still love him, its not his fault. We were young, we were having fun and mostly not harming anyone with our madness. I will now have to spend March doing other things, like writing down new ideas and trying to keep my wrist in a simple place. I hope you understand, im so sorry and i promise i will make it up to you in the near future.