Four months into 2019 and the best if yet to come, but first the balance. My first workshop of the year was in a primary school in East London, teaching, or attempting to, 5 and 7 year olds a country song called Put the woman in charge. A Beth Neilson Chapman song. 95% Muslim children […] 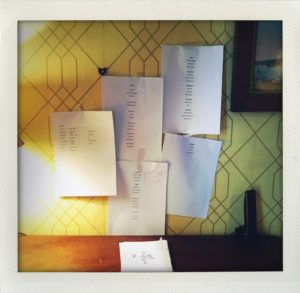 Four months into 2019 and the best if yet to come, but first the balance. My first workshop of the year was in a primary school in East London, teaching, or attempting to, 5 and 7 year olds a country song called Put the woman in charge. A Beth Neilson Chapman song. 95% Muslim children some with learning difficulties proved to be an eye opener for me, but I’m glad to say I was closely assisted by Lee who had worked there before. She held my hand and did the heavy lifting while I learnt to clap and be in the moment with the 60 kids we had in our hands. The focus was on a musical afternoon staged around the theme woman in Science. Our second song I wrote the words for, DNA, a close attempt at trying to find Sesame Street in Newham. If you know the songs from the 40’s Over There, you will know how it goes. I really enjoyed the experience, the head of the school was hard to get to know but such an inspirited woman she turned out to be. The performance went off without too much of a hitch, our class sang loudly and mostly in tune. I felt privileged to be there. There were some wonderful people in the band, Randolf, Lee and band leader Alex Wilson. A really lovely chap who ran a very tight ship. We all held each other throughout the 60 minute show which was performed in front of the parents and teachers. School dinners, not what they used to be. That part of London was new to me, it was like being in another country and one that seemed built around a strong community of people. I got to stay in a new hotel in East London, which was so new my room had never been slept in. Early starts and long days, teachers work so hard if I had a hat I would take it off for them.

Pennard in April, colder than June but just as nice. 16 writers on the crest of a wave all in the house, or close by ready and eager to learn and too take part. I set them a few balls rolling but mostly the week ran itself, the talent was evenly balanced between the ages of 70 and 16. The structure if each day worked well and I was so spud of all the songs on the ear. Some mellow some funny and some deeper and as they should be. I enjoyed the company of all the people who came, it was an inspired week and one im glad I had the good fortune of running. I was nervous for the few who found it tricky and I felt enthused by the youth around the edges. Two flew in from the US, Dan and Catharine really gave themselves to the week. Writers weeks are different every one of them but in the end they belong to the people who show up the most, they all did that. The next workshop is in June and then one in July so there is more to look forward to. After 25 years at the helm I feel confident that these weeks can go on and on, as long as people feel inspired to arrive and leave the ego in the hallway. Some of the songs from the week will last for a very long time, and some plugged the air around the room. The wonderful people at Pennard look after us always, thank you.

Broadway Lodge is in Somerset, a rehab, and the workshop here was very different, it was up to me to tell my story in words and song, 12 songs twelve steps. My musical chair. 35 people sat around me while I settled into the afternoon, I could feel the love in the room and the mood of people in early recovery which was so lovely. At one point I lost the plot and felt close to tears as the hurt and the pain of the past came to wrestle with my voice and my heart. This was a great afternoon and just what I needed, in fact I needed a bed myself. Places like this only just stay afloat, and many good people I know have been through this place including David Enthoven and it was for his memory that I showed up and always will. They would like to make me a Patron which is nice, I will do my best to do what I can to keep places like this on the map. Its one of the oldest in the country and I was so pleased to have been there and shared my story with such lovely people, all mad, all addicts and smarter than most. A busy day and a busy well balanced week of song and fellowship.

Back to work now and as a tour looms im ready to re string the guitar and look at some new songs to play, and stories to share from the stages of here. I often fight myself for reasons to be cheerful but this is what I do, I am the chap who has walked from his little bedroom on Combe Avenue into the world beyond and beneath. Keep coming back, as they say, it works if you work it.