We Caught The Ferry

Castlebar was a total surprise as I drove into town all I saw was kids hanging about in track suits and things looked a bit grim, but the club I played in and the people there were beautiful. My B&B was pine city and quite, a nice place to say but the crowning glory was […]

Published on May 17, 2019by Chris Diffordon Blog 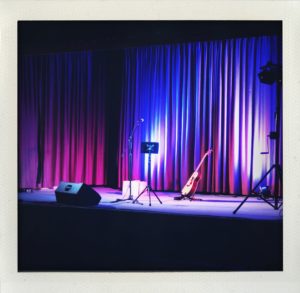 Castlebar was a total surprise as I drove into town all I saw was kids hanging about in track suits and things looked a bit grim, but the club I played in and the people there were beautiful. My B&B was pine city and quite, a nice place to say but the crowning glory was the food, we eat in Cafe Rue just along the street. Amazing grub, lunch breakfast and diner, fine tuck indeed run but the nicest of all people. A splendid trip. Thank you. Webster was a kind person, the promoter, he has seen things come and go over the years, you can see that in his face. The journey from Dublin was long enough, as was the trip the next day to my next venue. A theatre in the central of Portlaoise. A one man band ran the show and a very nice chap, very helpfulI. I eat next door in an Indian upstairs from a fishing shop. I ate too quickly for my tum, and I think I’m putting on timber by eating so much, something I’m worried about but the forks keep coming. And so the Irish leg of my tour is taking shape, pear shape. My show seems to be on the beat and people like the tales, long or short. I thought I would have to change things around but so far I’m on script. The driving is murder although the sun was out today and it was a joy to drive in such green shades. Each road seems to be long and narrow, a motorway will run out without warning and become a single track road, the single track roads go on for days, it’s charming, and Irish. My wrist is being a good boy, every now and then I get a twitch but otherwise its all good, on the journey I think about the rest of the year, I know its one day at a, but I can’t help wondering how different the band will feel after such a long time in a single seater. Ah well, we shall see. Thanks a million. Journey to the end of the page now follows.

My tired eyes are filled with pins, I’m trying hard to sprout some wings so I can venture beyond, the right that controls the wrong and be the wide awake one on his own in his B&B with a plastic phone and kettle that hums but never sings. Next door I hear the springs of someone turning in folds of sleep while I’m sat here like little Bo peep without a sound without a breath. And on my stage my treble clef it sounds so warn and full of rasp they say that things will one day pass but not for me here in this room my tired eyes and thought balloons filed with lonely thoughts. Inside I’m full of words I’m full of chords but what’s the point as life just sinks behind the decaf coffee that I drink before I eat the sleep upon my bed. I wake up far from family and friends, just to put a meal upon a plate, to hang a flower on the gate, to pump a tyre on a rusty bike to feed the woes that shine a light, as I recall the days that twist when this was not me, or Mr Chris. A distant memory of time well spent, but now its spent with grains of rice, iv been here once iv been here twice, but still I hanker for the quite the curry cake and pizza diet, now I’m so tired in my B&B its time for bed for you and me as we sit just the two of us so far apart yet like the dust we contrasts days with darker nights so full with needles in my eyes. I could be wrapped in cotton wool and fear the ever standing still sleep now young man and pay the bill before you leave and slice your toast, the mornings I forget the most. Hush now son as I creep to my bed, off with the glasses on my head, the light goes out and so do I next stop tomorrow a new place to lie and rest my head by a Monet print from the nick nack shop where the candles stink of exotic soap that just fill the air with a time and place where I do or dare to relax and twist the existing valves and when I come home with a heard of cows I will find my place back in tender arms. Love and home for me ring less alarms, I feel more at ease than I ever did, the old mans on tour he’s a touring kid, and this B&B takes me back some years when I was even more green around the ears, and I drank myself to a distant cloud, but tonight I’m feeling more than proud that I rest my case by a sober bed with only age old fears in my tired head. Its pins for me in these tired years making tracks each day behind singing ears and I still seem broke for all the work I do, never standing still this little boy blue, iv never worked as hard as this being on that stage being Mr Chris, yet the purse is slimmer than its ever been. I always come second when I dare to dream, the race is from half there and back I can see the winners way down the track, but the cave is full there is no more room, and I’m gone, out like a light. It’s tomorrow another night.

A lovely breakfast, home made Granola, Irish eggs and bacon, soda bread and golden marmalade. The sun is high its a beautiful day, and sleep was largely ok, with the odd leap and toss. Back in the car, so far 650 miles this trip, now over to Cavan a place I know very well from my days at the mast with The Strypes. What a great night was had by all, the band had rehearsed a packet of songs and they all sounded great, so they were dropped in the set and off we went. Not a full crowd but a welcome one anyway, the night unraveled like a towel on a lounger by a pool. It was so great to hear Ross sing, so nice to see them all. Pete on guitar, the secret twanger. Paul Cox, joke teller to the stars, solid, and Evan on keys dressed as Jools in a TOTP’s video of old. His sister Becky on guitar and on bass the chap with the slick hair and flying fingers called Sam. It was family night, and I loved it very much, its just a shame I was so knackered. The night was like a theatre show in some ways with the stories jokes and songs, the band were like that, we could have been on tour, and maybe one day. It was good to see Niall and get all the juice, its as if it were yesterday that I last saw him, and them. After the performance I signed some books and made it back to my hotel for a sit down, I had all the best intentions of eating again but went to bed like a good boy that I am. A long day, a long drive a long set and a short sleep, not the best ingredients for a touring life, but one I’m used to.

Into the last few days of this Irish jaunt, without a jaunting cart. It’s lovely to be here this the start of the long run, the tumble down, the months of another year, from one suitcase to another from one towel on a bathroom floor to another, from breakfast to breakfast, car to car. It’s a miracle, loving my journey is all I can do. Next year less of me, more of the surreal and the inspirational beyond, writing and being in that person that got me to where I am today, I want to know what its like to write again, to compose and float in and out of words which come to me like waves from a distant Ocean.

Belfast, grey and cold, its May. The hotel and I change rooms, but then I always do. I see Rufus Wainwright in the lobby, he looks rough and travelled. Like I do. The show was melancholic and amazing, his voice and words pin me to the deep. I sat and felt myself turn inside out with the weight of words, songs and his voice, its so emotive so very special, like Poses. His guitar playing was not very gentle and made me feel like Hendrix compared. I wanted to hear all the slow minor key songs and there they were. We said hello, he seemed out of the room, the last time we met the same. I was not expecting much, and that’s what I got. I sang with his Mother once in a group of singers including his Dad, it was a Christmas event in London. Rufus was not there, he may have been, perhaps he was out of the room there too. Back in the hotel and it’s time to fade like a fish on a reel. Im gone, I have dipped and taken the day with me, now its grey, now its May, now it’s nearly time to catch the ferry.

My show was brilliant, how tame of me, I loved the people and the crack, as they say. A full house of singing smiling folk, Squeeze fans and the like. Kit Phillipa came to see me, I love her songs and her voice, so it was so nice to see her too. After the show I rattled off to the dockside to catch the ferry and the long, very very long drive back home where it took me two days to get over it all, and get over the tour. It’s so special to be on stage, and sometimes on the floor, singing the songs what I wrote with him in doors, and some I spun on my self. The tour was worth the journeys and the meets, the books flew out the door as well as the wind from the curry. Ireland will always hold a very special place in my heart, for this I can be sure, to be sure. The older I get the longer it takes to get back on track, Mrs D had been working on the garden while I was away, my eyes lit up to see what she had done, it was welcoming like she is herself. However low I feel, and I do sometimes I know that my back has Roses growing up it and the sun shines upon my distant travels like a rod of amber passion. Home is a rock, a stone in the pool one to reflect upon on days like these.