I sat in my seat and wept like a baby as the plane veered right then left, up then down, shuddering like a transit van on a cobbled street. The pilot said it would last 40 minutes, and it did, the email from the weather pilot said the same thing. I was so tired, and […] 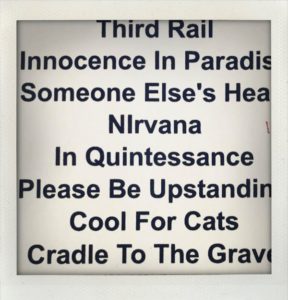 I sat in my seat and wept like a baby as the plane veered right then left, up then down, shuddering like a transit van on a cobbled street. The pilot said it would last 40 minutes, and it did, the email from the weather pilot said the same thing. I was so tired, and then the thundering stopped, the plane rolled slightly from side to side as I drifted into a state of being there. New York below, the runway and the plane was on time, it was 11pm. In the emigration hall 1,000 people all waiting to be seen by three very slow lines of unorganised chaos. I joined the cue and could have cried, but managed to jump the line by tagging on to a family, not mine. 2 hours. The car to the hotel, and so to bed. What a long day. Parr for the coarse. Seeing my kids Nat and Riley lifted me, both seem in fine form and nothing changes but everything from the last time I saw them over a year ago. Nat is almost 39 years old yet still my baby. Riley ever so lovely and ever so young for a 36 year old. Such a wonderful ray of light.

New York is sitting in a fine warm cuddle while I zip about the shops not buying anything, nothing fits, or I don’t need it. I wade through some homework for the tour and eat with Nat then Riley, then both.
The tour is in the next room ready for its own journey and already emails are a bundle, nothing changes but everything. Back home a storm hits and the village fair is cancelled, Louise takes off for Spain in 60 mph winds, she and me are terrified. I wait up to help her on board with some gentle words, the very words she feeds me the day before. All is as it should be, she lands, I land, we both see each other on face time and the world is the same as it was an hour ago.
Breakfast, coffee, black, two eggs sunny upside on toast, a smile from the waitress who seems to have been at the Soho Grand all of my touring life, like the doormen, they are part of the smile of this building and long may that be the case. It’s the constant that keeps me in the present moment. Today is Sunday the last day before it all kicks off, so I plan to walk like I did yesterday all over the city and just eat up the sunshine and the streets. Today is quite, its a day off composing myself and arranging my head furniture so that I can let go and let God take over while I prance around like the a fat bloke in a Fred Perry. Nothing changes but most things.

Watching TV here in America is an experience that has not changed much over the years, less kids channels maybe, more crime shows, more rolling news, no Gong show, more adverts for food cars and health, it’s rubbish on a massive scale. I watch as the reporters on the news channel go from one street corner to another, faces painted yellow, hair frozen into a shard, I feel like the World has lost its empathy and its lost its heart, there is no love story, the love has gone. People are all about self, they are all about greed. Life feels threatened by the ego of passing strangers, people who have hair like the reporters that report on them. The pound is falling, the dollar is stoned, the World is on a knife edge of grief. Too much information too much screen time, too much weather, its all starting to phase out of tune like an old valve radio, I know nothing about the politics of the day but I feel and see the tears behind the eyes of the ones that suffer the most, the displaced, the ones who are bullied into not having home, not being welcome for fear of extremism, the young with guns, the nerds on Facebook, the parents who are abandoned by there own children, replaced by screens, left hanging like wealthy business men who rape and trade on woman. Louise and I watched a film called The Great Hack, we are being listened to and manipulated by the people who serve us, please don’t vote for them or be one of the forgotten ones. Bring back the 70’s and Woodstock from the 60’s, the music and the love of our future past, bring back the hallucinations of laughter and joy, bring back the lolly and the wide lapels. If I indulge myself in the past I feel safe here in the present day, but I have to know that this feeling is only as good as the coffee and eggs for breakfast each morning, the repetitive each day, the love I can only have for the ones I miss so much, and the children who are so beautiful I’m so proud of them all. I hope one day they will experience the love and happiness of great times, days without lies and hatred, time without fear.

New York is the place to walk about get your hair trimmed buy jeans and eat food, its the place to stroll around in the 86% heat and own the place. Back in the day when he and I spent the day doing press and TV we were driven about in a nice car, these days we get in a taxi or walk, we introduce ourselves at the door and generally find our own way. Mostly the interviews are harmless and on the surface. Mostly it’s all about the 80’s and how we are placed with all the other music of that time, it’s a suit of armour guilded with feathers, very cosy. Day one of two over and time to nap on the proceeds of a bad night sleep and an early start. Outside the sirens yelp, the hum of the city trembles beneath me as I listen to Jazz 24 and yawn like a trooper.

Work like a wave starts gently on the shore, its ripples will grow into waves above our station while we wade in the water of our lives with gratitude and light humour, which is all we all need, like love, we all need love. We all need quite food too. Each day I have been seeing my two elder wasps, we go and eat and chat about how things are, its nice, but it seems that most restaurants these days love to blast music at you which makes me deaf and act like an old man. On top of that is the cost, I think I have overdone the food vouchers in this city. I can’t seem to leave without fishing out over $200 a meal and in todays World thats a lot of spuds. I got charged $60 for a plate of shrimps and pasta, that cant be right. I like a quiet meal, where you can hear yourself talk and share in the taste of friendship and food over a slow candle and a white cloth. I think I may have just made the wrong choice. Next week, bus food. It’s certainly expensive being here in New York with the way the pound is, its dropped so low that its almost level, so when I get a bill for the grub it’s almost one to one, tonight $242 is £200 in real money. Thanks wankers who wanted to leave. The tour starts with a heavy warning sign, stay off the fine dining and leave the kids with a nanny at home.

New York, bedtime 10.30pm, woke up 2am lost in the sheets of time, folding myself into a ball trying to sleep, but sleep was out of reach. My head then kicked into gear, things, places people hostages, and chords. I had to be up for 6.45 for TV with Mr T. I was up before the lark and feeling rough as old chips, I was worrying about everything yet the obvious answer is stop, there I is nothing to worry about what is is because and that is all because you started the thoughts in the first place. Shopping is a cure for most things, and sadly I pushed a few boats out today in preparations for the tour, new jeans, Fred’s and new lenses in my glasses as spares. I cant be in the shops it hurts to touch, and to eyeball what I really don’s need as I have everything I need, but the cure for lack of is shopping, but with that comes the depression, the fix always follows with a low, the high, the low, the light the dark. It’s been my life and it seems it still is. I’m all set as they say here in the America. Apart from a few gallons of sleep. In the air right now the rest of the band, on route to this , the bits of the jigsaw are coming together, one by one we seep into the fabric of this long tour, we will have to bond like apples in a crate to make this another great memory. So many tours before me now, and how many in the future who knows, if todays tells me anything it tells me that sleep is key to any functional repertoire of being. In this moment being is like holding on to a snail being dragged across a garden pathway. We will get there. I just want to have this still which is around me to soak me up and calm my nerves for the present, I would like to keep this feeling of sleep and nothing in my day, as tomorrow the bus wheels will roll and all still will be invaded by the incredible behaviour of being on the road.

Its bed time for bonzo, it’s 9.30. A long day. The band have arrived I saw them in the lobby, the bus is coming first thing so its time to pack again and sleep for another early start. Tour 80 begins, my last night with the dustbin lids, so we go for a Japanese and Nat bags gives me a nice gift for the bus, very thoughtful, the bill looks like a mortgage but it was nice Sushi and our final night crossing chop sticks over a table. I’s been so lovely to see them, I love all of the kids, these two are the first out of the can and therefore the oldest but they are full of love and mystery like true Difford’s. Room 521 has been a moody room, a room where sleep was not my mate, I had fun unpacking and re packing and buying stuff but now its time to head for the road, the great short sheets and the legs a combo on the stages of America in this time of great uncertainty and fear, this time when love is really all we need, but how can we spit out the dregs of that generation and invite the younger buds to grow. We will. From room 521 it seems like a far off dream, a dream of any kind would be good right now. Jazz, heat, the sound of horns honking in the streets below and the far away eyes of tomorrow, and nothing changes like everything.