Days off on tour are mostly dull affairs, treading water and waiting for the hangover of no sleep to catch up with you. Its labour day here in the US so everyone is on a break, downtown Minneapolis is empty, some dodgy looking fish on a Sushi counter and a few drunks sitting on thick […] 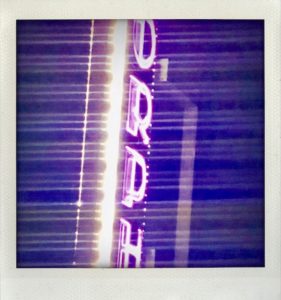 Days off on tour are mostly dull affairs, treading water and waiting for the hangover of no sleep to catch up with you. Its labour day here in the US so everyone is on a break, downtown Minneapolis is empty, some dodgy looking fish on a Sushi counter and a few drunks sitting on thick air in a parking lot. People on bikes and electric scooters whiz by, outside my hotel building works. It’s a dull day for me at least. Adam Ant is playing here this week, on the poster he looks dull and distant, gone from the Ants that used to be. Meanwhile on tele its stop the World I want to get off time, Boris, Trump, Hurricanes and guns, the Amazon and our climate, it’s far too depressing to watch and to absorb. The shows have been going well and there is talk of more next year, more on this once I get the updates, but it could all be very promising if all the right words fall into place. Chicago was one of the best shows recently, as was New York, both very much lifting, in fact all of the shows have had quality. This set of ours has found its bed and is beginning to yield fruit as we balance light with shade, but mostly light. Seems to work well. We have the songs and the suits, the tempo and the melody, it’s a great tour to be part of and after 47 years you might expect some self belief. It’s not always been like that for me. The two bus tour seems to work well and helps in so many ways with how one feels about each day, as we spread the band across many axels. I think we find time to be in the journey by not being over crowded with other peoples needs and wants, although they are important too. I still can’t seem to sleep very well on the bus though, up and down all the time, last night I hit the bunk at 1am up at 5am into the hotel and tried to sleep, finally gone around 7am into a deep snore.

When I call home I feel that nothing really changes while I’m away, the old seems new and the new seems about the same. This reality is far away from that, today I’m stuck in my room nursing a hangover of little sleep while the English country garden life revolves like the magic roundabout of time. Before I know it I will be back in the village with the same old things going on each day, sheep, mud, kids, cups on sideboards, cushions on the floor….and so it goes. So for today the reality is dull, dull as Adam Ant on his poster next to ours at the State Theatre next door to our hotel. In the future there are more solo shows poking up from the ground beneath this tour, mostly around the December time, ‘Christmas Shopping with Chris Difford’. On the tour there will be songs from the solo cannon, and a few Squeeze treats, but mostly other. Some nights with Boo, some with Melvin and some just me on my Jack Jones. Dates soon to be posted.

To the rescue, Melvin arrives for a walk, we walk and along the lonely empty streets of this city we discover the perfect Indian restaurant. We wolf down some tasty food and relax in the passing of the afternoon, but then once back in my room the dull arrives back to pull at my laces, and here we are, even the sky is getting greyer as night falls slowly. I would eat that all over again it was so tasty, but the reality is I will now fall asleep and try not to think about the next week and many hours spent on the tour bus heading West across the plains of America. Tomorrow, 6 hours followed by no hotel and another 8 hours, a day off, and then the long one up to Seattle. I would like my bus more its it wasn’t so dark inside, the windows never seem to let in enough light and there are suits hanging all around, as I have said its like living in a wardrobe. There was more light on the 53 bus that took me to school for all those years ago as a teenager, what joy! This reality is this tour and I have to say its been enjoyable so far, the fans have been incredible along the way, very loving and warm, the shows have been great there is nothing really to moan about.

A day off, a nap and CNN on the large TV in my room, its a constant reminder that out there in the big World things never seem to change, and its becoming claustrophobic, everywhere pain and suffering, where is the joy and the love, the peace and flower power. A day off and I may as well be sat in a sandpit with a small plastic shovel, its dull but that only I can change, and change is all I can do with he courage that I have within, to except each day for its individual ups and downs. I feel happy to lift my face into a smile, into a place of positive values so that I can get from this day to the next one, the bridge of time. Outside my hotel window the streets and the emptiness of evening, a sky lit up by neon, from one theatre to the next, from one bar to the next, the streets seem empty but the neon buzzes down on us all with great colour and urgency. I feel at least at home in this room with this view of the streets below, I see the theatre where we will be performing tomorrow night before the next overnight exhaustive journey into day. Our name looks good in lights, so many years ago it was just a name on a piece of paper in a top hat, now its there in neon for all to see, and with that comes the commitment of self and the nostalgia in its wake. I see people singing the words I wrote, singing the songs Glenn has manicured, I see people dancing with the beats that come from a whole raft of tribes men along the way. Stepping out on the stage is sometimes taken for granted, but for me it’s a very special moment, time is gone, you let go and let God. The next stop is the bus and the bunk, the journey into night to the next neon billboard and the house full of lovely wonderful people who are our fans.

What would I be doing now if I had not picked up a pen and a guitar, where would I be? It’s hard to imagine. I may have been working in an office somewhere, each day the same as the the one before, I may have been happy, I may have been sad. I could have been living in a house almost paid for in South London, or on the coast, Ramsgate? I look back and can only see that this path was the one I was going to ever take, so when I feel the dull I have to hold it up to the light and reflect upon what could have been. A small garden a shed, a wife and three kids, a space at the local pub to rest my arm and my woes. A fan of cricket maybe or a keen model maker, there in the shed with the glue and the matches. As I gently ease my head into the place of bed tonight I will say my prayers for all the right turnings in my life, the recovery of heart and soul, the children and the love of my life, the songs and the friendships that have come and gone. I know that days off won’t always be this way, days off at home are still, they are golden and take me to a wonderful place, one where dreams are made. Here on the road they are still too, for a few hours, then its back into the curve and the chicane of the next page, the itinerary you can not change or magnify, because this is where the journey takes me, takes us, and in doing so makes all the dull moments seem like they are in neon.