Leaving home since 1978, back on tour, this time until December this year, it’s now May 1st. Leaving home never is easy and even more so these days as I grasp an older age and feel less bushy tailed about touring. I do love the shows and meeting people its the travel and the bits […]

Published on May 3, 2019by Chris Diffordon Blog 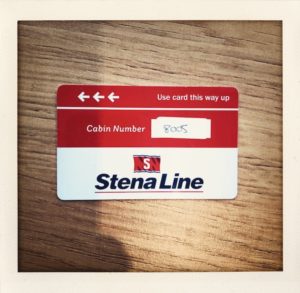 Leaving home since 1978, back on tour, this time until December this year, it’s now May 1st. Leaving home never is easy and even more so these days as I grasp an older age and feel less bushy tailed about touring. I do love the shows and meeting people its the travel and the bits in the dressing room that make it all a day. The long wind up the M6 to The Castle Hotel in Colwyn Bay never gets any easier, a stop on route for a Pizza made it bearable. Radio, radio all the way. I did however play a Chris Wood album for some of the A roads, which was lovely, to balance my ears on his fine words and stories, a gift. I left at 11am and arrived 300 miles later at my diner table around 8pm. A swift meal while eves dropping on a couple who had met at a funeral, the woman must have been a little older than me and was clearly chatting the gentleman up who sat next to her, while clearly wearing the trousers. He eat generously while she cast her net upon his kindness. They seemed well suited, both widows and both with grown up kids. I left them too their expressos and body language. In my room I took cover watching the tele, and then grazed into the sheets. Downstairs the kitchen staff watched the Liverpool game with great disappointment.

Morning came too quickly, it was 4am when I shrugged off the night, by 6.30am I was up and ready for the car journey to the ferry about 35 miles away, rain and more rain but, a very gentle day otherwise. On the ferry car alarms painfully stab the air as we travel out of port, in my cabin the tour begins. Ireland first up, South and then North. Join me on this epic journey taking me up and down the country over to the USA and back, then up and down the country again until the Christmas lights go back up on Regent Street.

Leaving home seems to be all I have done in so many passings of time, with the exception of when I stayed at home for 7 years in the middle. Its what I do I guess, that’s the job. Coming home is just as hard as leaving, you have to get back into the flow that has been set while you have been away, and the way you want the house to look and feel has maybe changed. It’s as if the hotel of life is your home, a premier Inn for sure. Mrs Difford finds it hard too, me coming and going, I have long said its like being in the merchant Navy being in a band. Some might say I’m a Narcissist for wanting to talk about myself all the time on stage, I can take that weight as I have no reason to talk about me other than people like the stories I tell, and it joins the shapes on my fret board together. Once I’m back in the band its another story, I waddle and smile, strum and be in the very moment God had planned for me, and then sing the chorus lines, I say little, I bring myself to the table and that feels like enough. It’s a very big table. Being away brings a loneliness to self, it’s great being at the show with people but then in the gaps there is just me, and in that moment I can dip. I try hard to keep my mind creative and happy but it’s not always possible. There is only so much time you can spend picking your nose. On the ferry I can look out of the window and sit on my bunk, its grey out there as we head to the Dublin Port and all beyond. I can tuck myself into a shape that is me, content and on a journey, again on a journey. I have left home, this time for 7 days, but in so many ways for so much longer. Steady as she goes upon the Irish Sea.

As I dosed off in my bunk I levitated my thoughts above the background noise, one by one they floated in thin air, one by one it didn’t mater as I ventured in to the room just behind the eyes, where napping takes place. A room cosy and lit by one candle. Deep sleep is way down the hall in the mind, a room locked most of the time, but as I get older it seems to be more on the latch for some reason. Sleep and napping is governed by the contact with the bladder, if it needs me it shouts loudly and drags me to the loo. A long one, a short one, its never like it was. Over a five bar gate no more, a trickle into the void. From here I can see the port coming ever closer towards us, it’s time now to yawn off the journey, feel knackered already and make headway to the Radio show that waits close by. A packet of complimentary crisps look appealing on the side, but I stop myself just in time. Where did the last few hours go. I have not been away a day yet and already the tour feels like a sack of spuds on my shoulder. I’m sure Sting would not suffer these feelings, he is fit and on the good stuff.

Thanks a million they say, here at RTE Radio I have three hours to waste sitting around the cafe and being in this other place waiting to be on the radio, to talk to say here I am. With a food voucher its lunch. And then the wait. I could storm out, but I wont, thats not me, it would have been wonderful to know that my afternoon would be like this, I would have gone to the hotel a mile away and sat around, sitting around is what you do on tour, I’m sitting around now, I sit around then I sit around some more, by leaving home in 1978 I started my dance of sitting down, standing up and running around in the chords and lyrics of my/our songs. Wonderful. After all that hanging around the interview was short and sweet, with two songs in with the pudding. I was out of there and to my hotel, another sit around and then on to IMRO for my interview in front of about 60 people. Paddy McKenna was such a nice chap, thank you sir. I have to say it was so lovely to be interviewed in such a relaxed way, the questions were spot on and gentle, I really enjoyed my 90 minutes under the lamp. There in the crowd old friend Dr Brian Kennedy, singer of angels, a person of great love and affection. It was good to see him in good health, on the mend, in life. He once sang and co wrote a few songs at my house, Mother in Me became Lamas Fair, his version makes me sob, it’s the high notes, his beautiful way of being Irish and within every song he sings. A sort walk away and Karelia an Indian restaurant of high class, yet rustic at the same time. Only a short 12 minute walk from my bed, such a good round off to a long and often tiresome day at the helm, but I’m here now and the tour can swing into action tomorrow night at Castlebar Co Mayo. Phew….and breath.