Like always I reflect and think how foolish I was not to look at the tour routing more carefully when it first came into my in tray all those months ago. It’s often the case. You get the dates and you sit at home and go well let’s pack our bags. As I get older […] 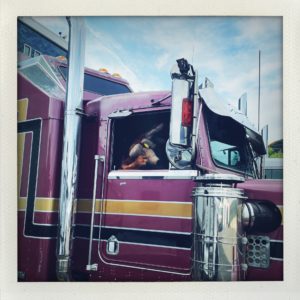 Like always I reflect and think how foolish I was not to look at the tour routing more carefully when it first came into my in tray all those months ago. It’s often the case. You get the dates and you sit at home and go well let’s pack our bags. As I get older the traveling seems to floor me harder, we are lucky to have busses to sleep on but I find it so hard to be rocked by miles of uneven roads and gear changing beneath my girth laying on a bunk. Last night we drove through the night, a distance similar to driving from London to Aberdeen, but we do this all the time. It’s all part of the touring way, we are the road runners.

A day off finds me wrecked on the bed with thoughts of food and sleep, my heavy weary self like a forgotten crisp on an empty plate weighs heavy like Oak. Nothing has changed in so many years of touring its always a joy to play for people and see them within our songs, its amazing and I feel grateful. I remember a quote from Charlie Watts about spending 50 years hanging about and 2 hours on stage, or something like that, and then on social media today he is gone. I have never before seen so many tributes online, it was very moving my heart wept as I struggled to get out of bed on my only day off this week. He was a reluctant Stone, he never liked the touring much or Rock and Roll so I read, he kept time and time kept him. A smartly dressed drummer with a wry smile, a gift for just keeping an inch off the beat and never once being held to account. In many ways this marks a turning point, bands losing members and carrying on leaves a lessoning credible love of the bands place in history, but then they do, driven by money driven by a passion, an un original mix. So should The Stones solider on? I think the fans won’t mind too much as long as they hear the hits, should The Who carry on, they do time and time again. Would I carry on, I don’t think so. The draw bridge would come up and I would possibly settle into another life, and there are others. Charlie Watts the drummer who filled my boots as a kid growing up on an Estate in South East London, a drum beat to ignite any cool party, a gentleman has gone.

I see many bands with replacement members, only the other night I saw Journey on CNN with a young lead singer half the age of the rest of the band, they proudly had dark black died hair. Some of it real. The next five years will reveal all as older bands shed members and younger bands struggle to fill the kind of shows the older bands have played for years. The art of filling a stadium with song is really only in the hands of very few artists, it’s a skill. Our agents hope we will fill larger venues as we grow older in years, I hope they are right its so hard to tell from this end of a date sheet. It’s all about knowing your place and how confident you are with what you have around you in your song. It’s a pack of cards that needs to be shuffled gently. The Stones three hour set is full of back beat and songs that seam a generation in tight jeans, its a night out like no other, one I’m sad to say I never saw. I should go out more. How lucky we are to straddle both places with what we do on our travels around the touring jigsaw. This tour takes us back and forth across America, it’s amazing to have this chance to tour right now during a pandemic but the routing is something to be desired. Here we are, where are we for now at least while the people walk in to take their seats and see us on stage opening up for Hall and Oates. They hear Tempted and the penny drops, its a hefty penny, hard to repeat.

A day off can mean so much or so little depending on what you do with it, tonight a nice meal in an Italian across from the hotel here in Des Moines. A calm little city very much on the tidy side. Like most days this week the temperature reached over 90 degrees so walking was not on the menu, at least for me. To see members of the band or crew on a day off is rare, we all keep to our own spaces. I look at the buses parked up and connect to the young man who toured without much more than a toothbrush in the old days, today as I reach the grand old years of 67 it’s different, I neatly pack and make sure I have all of me close by. In a few days time we will be half way round the tour and all I really want is for it to be part of my simple life sometimes hard to embrace, time runs out very quickly as todays great loss proves. You have to suck it all up like a Dyson and make the most of the dates on the date sheet. It’s not always that easy though. Don Everly died the other day too, another great gone from the poster, he and his brother Phil were never far away from each other yet on opposite sides of the same stage. All great partnerships suffer distance and misunderstand, I guess its because the talents are so strong like two magnets they oscillate sometimes apart. Somehow together. I loved the sound of the Everly Brothers but cant say I had any of their records. Two great passings in the same week two musical legends taken from the neon of the night. Heaven is full of greats, a stadium of wonderful songs never to be heard this side of Earth again, a place where we remember and respect the ones that came before.

A day off to email, catch up and clean the shaver, charge up on Zeds and be still. Time to look over the challenges of the next five weeks before the journey home back to the garden. There is so much to do and the most positive of heads will make it as successful as you like, only the complicated can make it complicated. Looking back at the day when I saw the US dates for the first time and I saw Des Moines on the sheet I never thought I would feel like this, and regret never seeing the Rolling Stones with Charlie Watts on drums. I saw The Who with Keith Moon in 1974 and was so pleased I had a chance to see the full set, he passed on and so the beat goes on. We are at a very interesting time in music when the old guard are making way for the new but where are the new guard, I cant see them or hear them. What chance do young bands get to tour like we have had the good fortune to tour over the years, the landscape and the date sheets are are rapidly being lost to the wind. A date sheet that said pack your bags lets go turned into a sigh and a body grown as I got out of my bunk at 5.30am outside the hotel. With a little more work perhaps this will be our legacy a touring band who paved the way for others to follow in our footsteps, then the others ran out. We were the first young band to tour in America before New Wave and Punk we played everywhere on the map until people liked our songs, that date sheet still looks daunting from a distance, but I was young drinking and had nothing more than a few T shirts to worry about. Dry cleaning was a thing in the future. Hotels were a thing in the future. Proud and very tired from the years behind me I wiggle off the bed to the hallway back down in the lift onto the bus and another show, another overnight drive another chew on the cud in the front lounge and a moment to listen to Exile On Main Street one more time before bed.

As we start to nibble at our own shows I feel the audiences love for us, it’s a lovely feeling, so warm. Some people are coming to a concert for the first time in 18 months, there is a genuine mass respect from us to them and them to us. I would like to thank everyone who is coming to see us and has come to see us play already as it means the World, the joy of the room is the lift we all need. Even though I feel weary and displaced I know that over the years this is what I do and where I visualise being. Touring since 1976 man and boy. Beep Beep. These are my days, Snug as a bug in a bunk, up every two hours to pee, holding on to a rail as the bus shudders back and forth, waiting often with eyes closed asleep. Back to the bunk, nod off hear the bus stop get up and look out the window to see a truck stop, the bus driver fills up with fuel. On we go, two hours later and up again. The bus stops out side the hotel I get into gear with my pre packed overnight bag and head for the still of room 826. On other nights, when on route to a Hall and Oates show, wake up in parking lot, it’s 6.30am. Soon. Get a Corvid test in a hot tent on the edge of the lot, back on the bus and then to catering for breakfast, normally with Gary and Simon. Outside a heard of tracks purr as their generators whine on, the buses all neatly parked up next to each other all purring too. Some of the band sleep in, the crew head for the stage to do work. A day of napping and eating catering, then the show, a one hour bang of the hits. Back on the bus and here we go, repeat until fried.