After a sold out Pier 17 show in New York I stayed at the Soho Grand and made my way to Boston on the midday train, it was full to capacity and unlike our bus, tranquil and safe. I had regrets about leaving the bus but another night in a bed seemed like the right […] 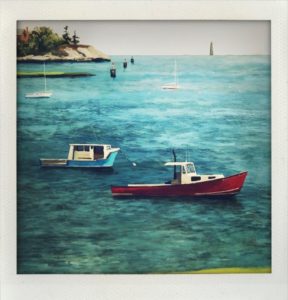 After a sold out Pier 17 show in New York I stayed at the Soho Grand and made my way to Boston on the midday train, it was full to capacity and unlike our bus, tranquil and safe. I had regrets about leaving the bus but another night in a bed seemed like the right thing to do, a full night in a bed being still is like being a baby in the womb, its sweet. This tour is going well the shows are all selling out and the band are playing the songs with great feeling, the set has bedded in and the camp is fine. I have no idea how many tours we have survived over the years, many, over 60 I would say, and like Groundhog Day the coffee tastes the same each time, it’s how you make it. Sometimes its difficult to image there being many more tours in my life, but I suppose they will fall into place like this one has, and the brew will get even stronger. That would be nice.

In the old days if you wanted to know how a show went down you had to wait for the papers to review you, or rely on backstage back slapping to know how good you were. These fine days its instant, you can go on the internet and there you are in picture and in review, I’m not good at finding the comments but others are, Steve Smith says we are doing great with people saying nice things. I really have passed the stage of needing to wonder what people think about us, I feel confident that what we serve up is the right amount of ingredients and with just the right mixture of spices, we make a fine curry up on the stages of America. Its not that I’m arrogant about life, the buzz of being respected and written about is fuel indeed, my heart and my eyes though fill me with enough when I see the audience and taste the atmosphere of our recent shows. Pure joy. The days that pass often very quickly on the road, there is so much going on and I’m surrounded by people doing things, feeling things and slipping in and out of their own days. Its tough for us all in and out of the tour, we all miss home we all miss the standing still of normal life, but here this is normal life, being on this train packed with people is normal life for today at least.

The third eye at concerts is becoming overwhelming, when we get to play the classics some nights everyone has a phone in the air filming the song, but do they watch it back or send it to friends, how does that work? Is it a way of being at a live event and engaging yourself in the digital and not the spiritual? In years to come I will say I went to see Prince, lets say, I have no record of me being there but my memory reflects the images and the feelings I felt on that night, I’m not sure I need to recall the digital World to say i have experienced being at a live show. It’s my age. I seldom see people without a screen, people of all ages on this train are all lost in the screen, the couple opposite me are talking but their phones are in front of their eyes as they speak, the older lady across the isle has a screen she keeps tapping at like she is trying to find a way in to some other World. It’s the third eye, a way to see into the future while missing the point of living in the now, the friend who has all the answers the screen that listens to you. Before this was that, the window to see the passing countryside, the wall to look at and dream of wonderful things, the jokes on tour that used to be shared, all gone, there is little now but the tumbleweed of technology as it calms us all into submission.

Home is there for me at the end of this tour, which finishes sometime in December after the UK leg and some solo shows, home is a rhythm that carries on if I’m there or not, the kids that have timetables and needs to be met, the dog and his timetable, the beating heart of the village which ticks slowly in time with the ever more radical seasons. Home is not here on this train, or on the bus, or on stage, home is there in the distance like a sun setting or rising in a distant sky. On days like these, and there are many, home transmits a wavelength of constant being, a place for the soul to shine and grow as the years creep up on me. My Dad when he was at my age was still working but coming to end of his productive life down at the Gas Works, often that was his home. I wonder if he could see the sun setting and rising in his sky like I can today. I think his day was simpler than mine, a walk to the shops to get his tea, a bus to the graveyard to talk with Mum, a walk down the hill to work. He liked to be left alone and enjoyed nothing more than is own company once Mum passed away, there was little to distract him, his screen was the fish tank with its tropical fish, the tele and the window into the kitchen. Here I am sharing these same years with him now but from another place, his foundations for me are still there, I have built on them over the years and made my life my own and in doing so have found my own home too, with the help of Mrs Difford of coarse. She provides for me that place of sanctuary and love that has been difficult to find, no time to sit and share this moment with her though, we are on different times zones and with different needs in this day. She as a parent to three young teenagers and me here on this train heading to Boston for a show. My tropical fish are coming to the show tonight to watch me swim around a few songs with some less than aquatic moves, and in that moment we will all share in a space unique to us all for the 1 hour 52 minutes we are in our songs. Home is there for me when I return from this place, and nothing may have changed, the pace and order will be slightly moved, the goalpost’s stay mainly in the same place as we all have to respect our needs being under the same roof as one another, being in our home like spiders in a nest, fish in a fish tank going around and around the same rock day after day where nothing changes but time.

Tired, a word I find hard not to misunderstand, tired is a feeling that gropes me and pulls me down, yet when I wake up I can not seem to resist breakfast and leap from the sheets, like a teenager I should just role over and fart. Nothing. Two hours into this train journey and I could sleep but the seat is upright and there is no recline, the bus bed is waiting for me like a beach on a sunny sunny day. On tour sleep does not come in vast amounts these days, I average five hours a night mostly, and then there is the please be upstanding part of the darkness that torturous me. I can hardly remember my youth, the days of sleeping past mid day and just roasting under the covers with a record player by the side of my bed. Sleep and tired are for the future once the earth has settled. The sky the ocean they never sleep they provide the canvas on which we paint ourselves as we journey through the universe at this time. I watched the NASA TV channel last night, it’s slow, and a bit repetitive but that place we call home is so fragile right now, the furniture of our Earth is being moved around while the Gods are all moving out, they know, we think we know. Fires, storms, ice melting seasons changing people revolting, war providing devastation to family life. It’s all gone tits up, so if you can sleep in past 12 and enjoy the sleep you are given as nothing will change in the time when you are being still in the wind of your own creation.

Tired like a song that has been worn out over time, a book no-one reads, a painting ignored, tired is this moment in time for me as I try so hard to catch up on the zed’s. A day off will bring some still into my week, we have two this coming week. I will eat, rest and pray. To be still is to swim in the present moment with calm and gratitude, and I feel grateful for all the things going on around me, tired or not. This tour is a blessing, and it will pass, and home will reappear as once before, its a surreal feeling to feel this amount of gratitude in amongst this feeling for tiredness. Tiredness normally invites the black dog from under the bed and we get up to our old tricks again. There he sleeps waiting for me to pour doom and gloom over the cheesecake of my day, but for some reason I won’t do that, at least not right now as the train races towards Providence and then Boston way up ahead. It’s been a nice ride, after all said and done, I have been glued to my music, and to my writing here on this screen, home for this journey at least. Tonight another show, this time in the round on a revolving stage, which is always fun. In 1978 we first came to this part of the World playing The Rat club for three nights, the tour went on for two months and we ended up back at The Rat club. All I remember is that The Damned had played the same club the night before and apparently had a Chinese meal on stage, inspired I think. 41 years ago the vibe was so different, our life seemed to me to be fast and furious, filled with warm beer fags and a small van which was cramped with ambition and hangover. There was home, but it was far away and there was tired but that was the butter on your toast, there was a third eye but it was my horizon.